Make hay while interest rates are at their lowest

By all indications from the reserve bank and analysts in South Africa we are nearing the end of the low interest rate cycle and can expect to see interest rates increase late 2011 or early 2012 and if you have been paying attention to profiting in low interest environments, you will be well prepared for the upward movement of interest rates which is very likely to come around.

A few tips to reducing your debt, in particular your mortgage were to have kept paying the same repayment as interest rates began falling. A simple illustration of the effectiveness of this strategy is that by keeping your payment a mere 10% above what is required to service your mortgage, you will reduce your repayment period from 20 years to 14 years.

Here is another staggering example. In 2002 when interest rates were at 17% the repayments on a mortgage of R1million would have been R14 700/month, and now that same mortgage would be R9 000/month. If you had kept up your repayments at R14 700/month you would now have paid off over R615 000 of the capital amount over that period, which would now be available to you if you had an access bond. If you did not use this strategy ask yourself what you have to show for it. 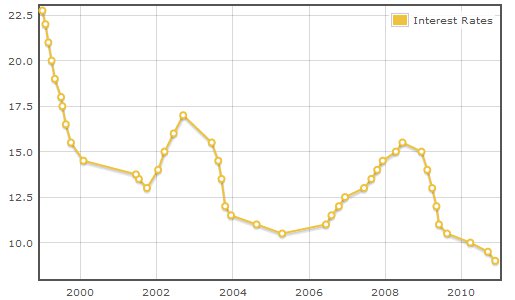 It is never too late to start taking advantage of reducing your debt and while the interest rates are still at their lowest levels you may have as much as 12 months left to reduce your capital, reduce your interest and prepare yourself for the inevitable rise in interest rates.

For those who did use this strategy and have now fallen on hard times during the recessionary cycle we are in, they will have capital available to help them through these trying times.

Play around with the mortgage calculators to see the effects of over or underpayment on the capital amount of your mortgage and start using your mortgage in your best interests.

Using your access bond as a savings account is a very wise decision but of course the first thing you want to do is pay off any high interest debt like credit cards. This type of debt is extremely expensive and can have a significant impact on your cashflow once they are paid off. Discipline is the most important factor in financial planning, start using your cheap debt to reduce your expensive debt and prepare yourself for the interest rate increases which are on their way.